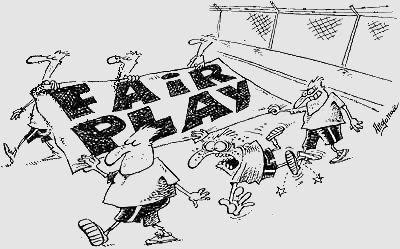 Sports has always been mixed up with Politics throughout modern history. The most famous incident is the "Ping Pong (Table Tennis) Diplomacy" carried out between China and United States in the last century.

However in Singapore's context, Sports has been politicized by the ruling party PAP so much so that it is not uncommon to see PAP MPs rushing in to get whatever political brownie points whenever there are chances of making an issue out of any "victory" out of any sports. But there exceptional blunders lately that sports have become a political liability rather than assets.

First of all, the bounced cheque of "Football World Cup 2010". Every PAP ministers and MPs want to forget all about that big bold "vision" that crashed miserably. In spite of filling up our National Football team with so many "Foreign Talents", we are no where nearer to be qualified for World Cup 2010.

Secondly, the big hoo haa over the Table Tennis team. It is really eye opening how a PAP MP could just take over the position to chair the Table Tennis association just a couple of months before their winning of a medal in Olympics 2008 to claim whatever little credits there is. It would have ended there nicely but it is really mind-boggling that she subsequently ended up in a quarrel with the trainer who are rightfully the most important man in bringing the team to victory. Eventually, the trainer has to leave the team. I have played a lot of games in my schooling years and I have never heard my teacher in charge questioning the professionalism of our trainers especially if the teacher in charge is new to taking the team!

Thirdly, in an over-zealous chase after the "Glory" of holding the first Youth Olympics, our PAP government has made great promises during the bidding process which subsequently ended up with broken ones. The half a billion Olympic village in NUS isn't going to be ready in time for the game. Worse of all, many foreign teams are withdrawing from the game. The situation is so bad that PAP leaders need to hard sell the event, trying very hard to convince other countries to attend when they are attending some other political convention overseas!

Fourthly, for the first time in history, we are going to abandon the opportunity of hosting the Southeast Asian Game! Reasons aplenty but many are questioning why? Since we are prepared to hold the supposedly more prestigious Youth Olympics even without the originally planned Olympic village and the Sports Hub, why couldn't we host the Southeast Asian Game just a couple of years later?

Many people may feel that it would be good to save some money from hosting such sports events but the crux of the matter is, this will be another hit at our "Singapore Brand". It is going to affect our international standing as the Gem of Southeast Asia. Yes, in our over-zealous pursue for "great fame" and political mileage, the PAP government has totally mismanaged the projects. It has all backfired. We are now known to be a small city state that are too boastful of what we can do but couldn't deliver it according to what we promise. Is this "Singapore Brand" that PAP government is making out for us?

While the PAP wants to enjoy the limelight and glory of "Sporting Success" but somehow they have deliberately ignored the substance and essence of sports. It is just another sad story of form without substance.

It has become a "norm" in public consciousness to view whatever policies or laws with regards to electoral rules that are changed by PAP as "unfair" or rather, always in favor to PAP. In fact, PAP is unapologetic in its behavior, openly stated that it is not PAP's responsibility to take care of opposition's interests. But it is not exactly opposition interests that is involved in the process. It is in the Nation's interests to see a fair level playing field to be set for all political players.

In fact, most Singaporeans view PAP's self-serving reasoning quite bizarre; eg. when PAP decided to incorporate the GRC system, it declared that it is about proper representation of minority races' interests.

But somehow, we do not see how increasing the size of the GRC from 3 to 5 or 6 could achieve that stated objective. In Singapore, about 25% to 30% of the population are either Malays, Indians or other races while the majority are Chinese. So when PAP started to increase increase GRC sizes to 5 or 6 with the requirement of one minority candidate in each GRC, it effectively reduces the minority representation!

Of course, for anybody that values Fair Play as in sports, one would want to have an independent referee. But in spite of constant criticism of PAP putting the Election Department under the control of the Prime Minister office, PAP has refused to make it an independent statutory board. Singaporeans are used to the irrational and bizarre boundary changes that are being put forward by the Elections Department just before every General Elections. A central area in Serangoon could be grouped under the coastal Marine Parade GRC. It is no wonder for most Singaporeans to perceive that PAP does not value Fair Play at all. Each and every policy change with regards to Electoral rules are also viewed with contempt and skepticism.

Although all these are just old issues but they are forever relevant to us as a Nation. When the leaders and ruling party of the Nation do not practice Fair Play, it becomes a very bad role model for our young people. It would be highly hypocritical for politicians to stand in front of the camera to cheer upon any sports event while in essence, the ruling party doesn't practice Fair Play itself.

For a start, set up an independent Elections Department that would draw the electoral boundaries with more common sense rather than base on statistical calculations for the benefits of any political party.

Secondly, open up the traditional mass media to give fair and just coverage of each and every political parties. No matter what the government says, the holding of the controlling stake of all the media companies in Singapore are telling signs of unfair practices.

Thirdly, I would like to see a more consensus building among all political parties when it comes to changing of electoral rules. Although the ruling party has the required two third majority in parliament but it doesn't mean that it could just do whatever it wants to the Constitution of our nation. Each and every Singaporeans have a stake in this nation, not just PAP members. We should start to build up consensus in setting up a much fairer political system in our country.

Fourthly, PAP should stop playing Pork Barrel politicking. It is a shame that in this new century where our very own Prime Minister has commented on other people's practice of pork barrel politics, while his very own ruling party is practicing it in our very own backyard!

An Open Society isn't just slogan bitching. It needs substance and it needs to base on the universal understanding of Fair Play. We have a long way to go in terms of building up an Open Society and in fact, we are taking one step forward two steps back most of the time.

It is about time we trust our own people to make the right choices for our Nation. To attribute any loss of seats by the ruling PAP as "freak election result" is an unjustified insult on our people's choice. Democracy could only be developed with Fair Play in place. This should be the most important essence that links Sports and Politics, not just that flowery and shallow glory that comes with it.

I notice you have been communicating with a person nickname "scroobal" in sammyboy forum on your election strategy. according to what i checked on the net, he could be a SPH staff. pls be careful when speaking to him.

Hello ,
Am Mrs Cynthia corvin . Am a lady with a great testimony I live in USA and i am a happy woman today? and i told my self that any lender that rescue my family from our poor situation, i will refer any person that is looking for loan to him, he gave happiness to me and my family, i was in need of a loan of $360,000.00 to start my life all over as i am a mother with 2 kids I met this honest and GOD fearing man loan lender that help me with a loan of $360,000.0.Dollar, he is a GOD fearing man, if you are in need of loan and you will pay back the loan please contact him tell him that is Mrs cynthia corvin, that refer you to him. contact Mr.Zak,via email:- feroozsuptoo@outlook.com