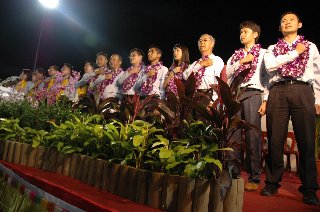 Workers’ Party has brought up three broad categories of issues in GE 2006. They are:

I will be touching on the issues I have brought up in my election speeches that are related to the three categories in the following postings.

The question of accountability is a very important issue. We have to hold politicians and political parties to their promises, make them account for their actions. This is the fundamental pillar of a democracy as contrast to a monarchy. In order for such a democratic system to function well, transparency of the whole government is very critical. Sad to say, many of the decisions made by the PAP government is not transparent at all. For example, they have never explained about how they allocated government funds for HDB upgrading. Some PAP wards have more upgrading than many other PAP wards, not to mention about wards held by other political parties.

Without much information of the governance of the ruling party due to such opaque management, the only way I could think of is to use PAP’s broad promises made in past elections as the attack point. There are many PAP broken promises made in the past, like “Swiss Standards of Living”, “Asset Enhancement”, “More Good Years” etc, but these are just too general. Thus, I decided to concentrate on three more specific issues:

These are issues closer to Singaporeans’ hearts to start with.

For a start, WP’s stand on CPF is to maintain it at 35% (higher than the present 33%). This stand has been recorded in our 1991’s manifesto. This to balance between the needs of retirement and business cost. This stand was made in the context of 1991 whereby HDB flats were cheaper (no asset inflation and asset enhancement), no payment of HDB upgrading using CPF and no payment of rapidly inflated medical cost using CPF.

Conditions have changed since 1991. We are facing insufficient retirement financing right now and in the next one or two decades, the problem of insufficient retirement financing will balloon with an increasing aging population. Since PAP made the promise in 2001 Elections that it will restore the CPF contributions to 40% once the economy is good, it is then only right to hold PAP accountable to this important promise.

As usual local media has a blackout on this attack against PAP’s broken promise. I have even suggested that the problem of insufficient retirement financing is due to low return rates on our CPF savings. Imagine that if you could invest your CPF funds in some very safe government bonds for 5%, why are we getting only 2.5% or at most 4% from CPF board? I have also suggested that if we want to increase the return of our CPF savings, then it is only wise to have a better investment mechanism. Let GIC and Temasek Holdings invest our CPF for us since they claim to have high return for the past decades! Why would GIC and Temasek serve the interest of the government only but not the citizens?

We do not want the government to be rich while the citizens suffer insufficient funds for retirement! If PAP government has the citizens’ interests at heart, we will not end up in a situation that government is rich while citizens are poor. Every profit made by GIC and Temasek Holdings, most of it are put into the reserves. They did not serve Singaporeans directly. Why not let citizens utilize the World Class investment arms of Singapore Government to make more money for their retirement?

Building of a Northern Hospital in Yishun East

This promise is made by PAP back in 2001 Elections. Some may wonder why this issue is so important that I need to put emphasis on it again and again.

The reason is that in Singapore, we are short of government hospitals! This is the primary reason why our public hospitals, despite increasing fees, could face bed shortages! This problem was raised when Mr. Low Thia Khiang was rushed to Tan Tock Seng Hospital when he contracted dengue fever. Mr. Low lives in the North. For those of you who live in the North, you would realize that there isn’t any hospital in the North at all. This is really an abnormality as the population residing in the North is rising rapidly with the new estates of Sembawang, Sengkang and Punggol growing in size. Together with the matured estates Woodlands, Yishun and Ang Mo Kio, there are at least half a million people but there is no hospital in the North! If one depends on Tan Tock Seng Hospital alone, I do not think it could cope as it also serves residents in Toa Payoh, Bishan and Thomson. Imagine if you have an emergency in Woodlands or Yishun, how long will it take to reach Tan Tock Seng? Not to forget, CTE is always jammed during peak hours!

This is a matter of life or death to residents living in the North! Thus to me, it is a very important issue to bring up. Of course, PAP tries to respond in a positive way that it is taking “actions” to build one hospital in Yishun East. However, 5 years have passed, where is the hospital? They say it will be ready by 2010, earliest 2009. A first world government needs 9 years to build a hospital?

PAP has stressed that Medical Care will be kept “affordable” in 2001 Elections. But we know that right after 2001 elections, medical costs shot up, increasing at such a speed that only in 2005 PAP suddenly woke up and realize that something is wrong. Re-structuring of public hospitals and the liquidity provided by CPF Medisave are the key reasons why medical costs have shot up. After many complaints about certain medical costs in supposed “subsidized” restructured hospitals are higher than private hospitals, PAP government suddenly woke up and pulled the brakes. But this is just too late. We are facing high medical cost but no increase in quality in their services as they are overloaded.

Medical cost is not just about money. It is also about life and death. As I have mentioned in my speech that there are even people who would rather risk their lives instead of calling the ambulance! (I did not bring up comparison from Hong Kong basically because I have insufficient data but I will write more on Hong Kong’s medical service after these few GE related posting. )

PAP has said it wanted to debate about issues but it seems to me that they have chosen to avoid such debate. There were no direct responses from PAP towards my serious attacks during the elections. Only a token demonstration of the Yihsun hospital was made during the GE. But they did not say why it takes 9 years for a First World government to build a hospital that is in urgent need!

I will leave my readers to judge about these issues. PAP has not made any substantial promises this time round, save and except HDB upgrading. Maybe they are running out of ideas or that they are just not confident about fulfilling their own promises after breaking so many promises made in the past!

Afternote: During the GE, I have asked PAP to answer a few questions on fees increases. Are they going to increase public transportation fares? Are they going to increase public utilities fees? They would better list out all the good (HDB upgrading) and also the bad things (fee increase) and let Singaporeans decide whether to vote for them or not. Again, PAP chose to keep silent on these questions. Now, we know the answers: they are going to increase electricity tarriffs and most probably public transportation fare in the coming months. This is only a few months after elections! They should be more open and Singaporeans should take them accountable to their policies next time.
Posted by Admin at 1:29 PM 7 comments: 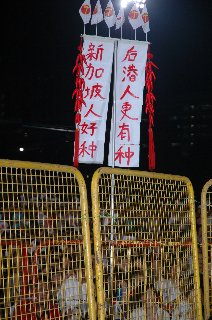 Recently, quite a number of people have written and spoken on the issue of lift upgrading. I would like to put up my view from another angle. This view is formulated after some discussion with some friends.

Many people would be surprised by the "generous promise" of lift upgrading made by PAP government. But one should ask, has the PAP government been so generous towards Singaporeans before?

Many people really think that PAP wanted lift upgrading just for its political gains but there is some more valid technical reasons for having lift landing at each and every floor for old HDB flats.

For a self proclaimed World Class government, it has made a grave mistake in the past by building HDB without lift landing on each and every floor. The reason given as "people at that time like privacy" is really crappy to start with and cannot hold any water. Even for the colonial ruled HK back in 70s, all buildings more than 7 storey high fitted with lifts will have at least one lift that could reach each and every floor. This is called "fireman lift". Yes. This is to adhere to world class fire safety standards but one may ask, why the self proclaimed world class government did not adhere to world class fire safety standards?

What PAP govt is doing right now is to correct past mistake; it is not really about political gain but it is about fixing up past mistakes.

I was told that the fire safety rules have been made in such a way to exempt HDB flats built before a certain year from adhering to the stringent fireman lift requirement. But new HDB flats and buildings will have to adhere to this fire safety standards strictly. One must ask, are HDB flats built before that arbitrary date so "special" that it makes fire fighting so easy that we do not need fireman lifts? Contrary to this, the design of these old HDB flats make fire fighting very difficult.

To be fair to PAP government, it has corrected its oversight of fire safety for HDB flats before, though quietly. Fire access roads to old HDB flats have been created. Fire rated doors have been installed for those flats near the staircase FREE OF CHARGE. But what about fireman lifts? Lift landing on each and every floor to facilitate fire fighting?

I would urge the PAP government to step out of their own political agenda and look at the issue on a more altruistic manner. This is about fire safety of ALL SINGAPOREANS living in old HDB flats we are talking about, regardless whether they vote for PAP or not! I would urge PAP government to make this an urgent need, top priority of all other cosmetic HDB upgrading, to make it a safer living environment for all. If we could save on all other less urgent upgrading, we could well finance all the necessary lift upgrading for ALL OLD HDB flats.

Lift upgrading for lift landing on each floor is an URGENT AND NECESSITY to comply to fire safety standards. It should not become a political party's tool to win votes.