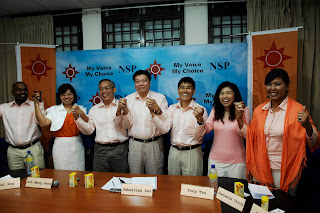 There are a lot of comments on my previous post on Friendship and Politics. Terrence from New Nation has even written a pretty critical article on my blog post. I have made a comment on his article as well.

How opposition parties contest is an important National issue because at this stage, it involves the critical development of the Nation's political landscape for Post-LKY era.

There are a few points I would like to put forward which I believe represent the aspiration and expectation of Singapore voters at large:

Many people have mistakenly perceived my previous blog post as "attacking" fellow opposition party WP. Those who have met me during my ground work would know very well, whenever I meet people staying in Aljunied or East Coast GRCs, I would naturally encourage them to vote WP. How would I be attacking a party which I promote?

As I have explained to Terrence of New Nation, when I wrote that blog post, I was writing as a normal person, not a politician. It was true feelings that I have expressed which includes my frustrations of how things went wrong.

As I have mentioned, I regard Mr. Low Thia Khiang very highly as my political mentor while I was still with WP. Even till now, I would still respect him as my political mentor. I believe he too has the soft spot for his ex-student like me when he said he has given up WP's "first choice" because he knows I am going to contest there. Thus, WP chose Moulmein Kallang as the target for its expansion plan.

However that is really the crux of the problem.

I think most people really think too much of my blog post. The Zaobao reporter actually thinks that I am hinting WP is trying to block NSP because NSP is becoming a "threat" to its position. That is just that bit too far off. The truth is, when the space within the eastern corridor is so packed, two opposition parties enjoying growth will definitely face each other in a situation of 3 corner fight if they don't want to move towards the "untested" territory in the WEST.

NSP has done its part. Although NSP has generally been contesting and working the ground in the eastern corridors like Tampines and Jalan Besar (which is now split into Moulmein Kallang and Whampao), in order to avoid clashes with WP, we have started our expansion plan in the wild wild west, Jurong GRC which was not contested in 2006. We have tried to avoid WP's traditional ground like Aljunied and East Coast.

The clash of 3 corner fight is inevitable because unfortunately WP has taken up a totally different strategic approach from NSP. WP chose to stay put and expand in the eastern corridors which inevitably step into "traditional turfs" like NSP's Jalan Besar. Mr. Low Thia Khiang has even indicated that WP's first choice was Tampines.

That is why I say I would understand why it is inevitable that both WP and NSP will end up with 3 corner fights, in the eastern corridor.

In both NSP's and WP's perspectives, the mid-eastern part of Singapore would have more "fertile political land" basically because most parts in this area has been contested in past GEs. Consistent GE contests would naturally improve political awareness and consciousness of voters.

When good people like Tony Tan and Hazel have shown interests to join NSP and contest in the coming General Elections, as the co-leader of NSP, it is my duty to make sure that they will get a reasonably good fertile ground to work on.

In order to protect Tony and Hazel's team from 3 corner fight in Moulmein Kallang, I have even offered their team to stand in Tampines but both of them have declined the offer immediately citing the reason that I have worked so hard on the minister-specific strategy on Minister Mah for so long and I should stay put there. They decided to contest Moulmein Kallang instead, which is the other ground which NSP has worked on consistently for the past decade.

I believe that both WP and NSP are responsible and credible opposition parties which would make due considerations in terms of national interests to avoid 3 corner fight in Moulmein Kallang GRC in the spirit of trying to enhance Singapore's political landscape by trying to send good and credible people into parliament. This could only happen if and only if we could provide them a reasonable good fertile ground to work on.

It would be sad if both WP and NSP have two teams of good people clashing in a 3 corner fight. This is especially so when there are other constituencies like Sembawang GRC which will go uncontested for the coming GE. NSP has done its part in deciding that the team which is supposed to contest in Nee Soon GRC would be withdrawn from there to be deployed somewhere else.

Any opposition parties, including NSP, could afford to lose elections, but Singapore cannot afford to lose, to lose the opportunity to send in good and credible people into parliament. I just hope that in the coming days, the negotiation will have fruitful outcome that will serve the Nation's interests as a whole.

This is the 10th Anniversary of my involvement in opposition politics but instead of feeling happy about this "unusual journey" that I have chosen, I just feel sentimentally strained.

Throughout these 10 years of active involvement, I have made quite a number of friends as well as unknown faceless foes. I have worked hard and contributed to both Workers Party's as well as National Solidarity Party's growth in two different periods.

I have special sentimental attachment to WP especially when I have contributed to the rise of WP in its re-branding exercise by helping to revamp the party and fighting the battle of Aljunied GRC in GE 2006. I would regard Mr. Low Thia Khiang as my first political mentor who have guided me through the formative years of my involvement. And I still respect him as the saying goes, once a teacher forever a teacher.

Along the way, I have made many other friends in WP who have up till now, still remain close friends.

My departure from WP was the darkest day of my political life. I have chosen to leave very quietly without much fanfare even though the pain within is just like a heavy stone pounding the heart repeatedly non-stop.

After a few months of self reflections and reassessment of the roads ahead, I finally decided to join NSP with strong persuasion from Sebastian Teo, President of NSP. Frankly speaking, at first, it was a cultural shock to me. I have to spend time adjusting to new party culture and such. I was asked to take up the Secretary General post when Law Sin Ling decided to step down but I declined because I know I still cannot fully integrate into the party just yet.

It was last year that I finally decided to take up the Secretary General post and from then on, it is a road of no return.

NSP has transformed very fast under the leadership of Sebastian Teo. Within a few years, we have revamped our newspaper North Star into one of the top selling opposition papers in town. Even some ex-WP comrades have told me privately that North Star is indeed better than other opposition papers. We have inaugurated the Malay Bureau and our membership has grown significantly.

Never would I expect that WP would have 3 corner fights with NSP in the coming GE. I am being torn apart as my loyalty for my party NSP has to be weighed against the friendship I have cultivated in WP. At one point of time I was even contemplating to be the one leading the team in Moulmein-Kallang GRC to fight out the impending 3 corner fight because it would not be fair for my other NSP comrades to bear the brunt of such aggression. I am totally disappointed but in a certain way, could understand why WP has to go into such aggression. For two parties which are growing rapidly, it is just a matter of time that such battles will be waged.

It is not a battle of politics for me but rather, a battle of sentimental emotions against upright reasoning. There is absolutely no reason for WP to step into Moulmeign Kallang and wasting resources in a battle that nobody can win when there are other places like Sembawang GRC which is just next to Nee Soon GRC which is not contested.

The main aim of all opposition parties should be winning a GRC, not going into 3 corner fight. This is especially so for WP which is viewed as the biggest party with the highest potential to wrestle Aljunied GRC from PAP in this coming GE. A 3 corner fight in a GRC with fellow opposition party like NSP is truly unnecessary distraction from the main mission.

But somehow, I think WP members have lost sight of the most important mission they have set for themselves for this GE. Many of the new members have not gone through the baptism of fire, least contributed to the re-branding exercise that we have gone through but yet they have such a "gungho" feeling that they are invincible and could possibly thumb down other parties.

It is with my saddest and painful heart that I have to fight for Singapore in a very unique way. Arrogance and head-swell syndrome are bad traits for Singapore politics. It will be a hard battle ahead but I believe that each and every voter will have a very clear mind of what fairness and good reasoning mean.

Goh Meng Seng
Posted by Admin at 2:02 PM 43 comments: Links to this post

I have just come back from the Pre-Elections Conference for all opposition parties. It is a tiring process although we have made some progress.

I am not in the position to reveal any details of the meeting but I will speak about my view in general of why this meeting is so important for Singapore, not just opposition parties.

Some people may not agree with me but this is the sentiment on the ground. People are prepared to vote for opposition but NO 3 CORNER FIGHT PLEASE!

NSP has been very open, reasonable and ever ready to negotiate so far in this whole process. Although there are still some outstanding issues to be ironed out, I believe and am hopeful that most opposition parties will come to reasonable settlement for all. It is not going to be a simple process but i just hope that everyone of us can take a good look at the overall picture. When we come to negotiation table, it is all about give and take. There must be willingness from all parties to reach a reasonable settlement for all.

The next meeting will be held on this coming Saturday (5 March 2011). I just hope that every outstanding issues will be solved by then.

Goh Meng Seng
Posted by Admin at 1:31 AM 9 comments: Links to this post