An Open Letter to President Xi of China

Why Singapore PM Lee is so concerned about TPP? 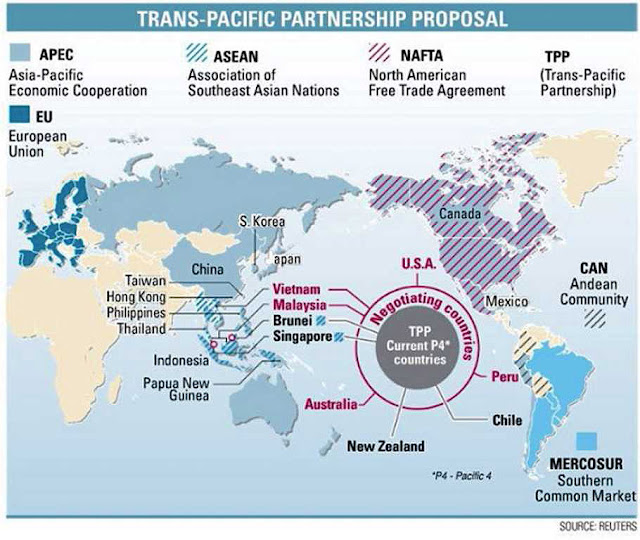 I happened to read about an article on TPP posted on TOC (The Online Citizen) website
but I found it has misrepresented some of the things on TPP. I have written the following in response on my Facebook:


There are some erroneous or inaccuracies written in this TOC article. Apparently, it is not written by someone who is well verse in Economics.

First of all, TPP is not just about Trade. It is about Free Market Globalization. i.e. Besides the free trade of goods and services, it also includes free mobility of capital as well as labour.

The reason of "Protectionism" vs such Free Market Globalization is not only because it protects companies and their products, but it also protects its wages for the labour as well as certain sovereignty issues in prevention of critical assets of a country being acquired by foreign countries.

While the article is right to say that most of the time, it is the more well off countries which will resist such agreements, but there are also costs to poorer countries. For example, there is "Economic Colonization"; i.e. all critical resources would be exploited or plundered by the richer countries.

As for wages, it is not a guarantee that workers will benefit from TPP just because companies can sell to a larger market or consumer base. In fact, more likely so, workers will be exploited by wage suppression as they could be replaced by a larger and cheaper source of workers among the countries. i.e. supply of workers suddenly increased many thousand folds. This is actually what is happening right now in Singapore.

Moreover, bigger companies benefit the most as compared to the local companies. All these will result in great wealth and income disparity. i.e. Big companies shareholders will be richer while workers suffered lower wages.

There is also an issue of structural immobility. In Keynesian Economics concept, Free market is good as the invisible hands will solve everything. But the truth is, this doesn't take into considerations of many things. Product life cycle is becoming shorter and thus, we see a lot of structural displacement of skilled workers who will suddenly find themselves irrelevant. Talking about re-training and restructuring is easy but execution will be difficult.

The only reason why Singapore needs TPP badly is due to the fact that it is a small open economy without much agricultural sector. Not even much organic industrial sector to start with. We all depend on MNCs and GLCs. MNCs needs mobility of funds. GLCs and our sovereign funds like Temasek and GIC, needed ease of mobility of capital to effect greater returns with less cost in capital investment. These are the main REAL benefits for Singapore.

Small and Medium companies may benefit from bigger market but the truth is, as stated in the article itself, we already have quite a lot of FTAs with most of the individual countries listed in TPP!

But the cost to us, Singaporeans, in return for GIC, Temasek and all those big GLCs to have more investment opportunities, is continued suppression of our wages. Income and wealth disparity will continue to be widen and only those ruling elites and their cronies in these GLCs will earn higher exorbitant bonuses and salaries.

On top of that, as the article says, we will face HIGHER cost of medicines with the elimination of generic drugs.

BTW, when Japan can sell more cars to USA, it doesn't need to use our port facilities. That's utterly wrong to say that. They could well ship direct to US across the pacific. (For anyone who want to doubt me on this point, please refer to this website on a freight forwarding shipping company specialized in car-cargo transhipment)


In short, the reason why our PM Lee is so concerned about TPP is not about Singaporeans'  well being; in fact, TPP will make most Singaporeans worse off, with bigger wage suppression from a larger pool of foreign labour from the Third and First World countries. Singaporeans will face higher healthcare cost and we will face a deepening of income and wealth disparity in Singapore.

The only reason why PAP wanted TPP so badly is because TPP could enhance its GLCs, Temasek Holdings and GIC investment opportunities overseas. We have seen this in CECA which we have signed with India in which we promised easy access and migration for Indians to come to Singapore and work, in return for investment opportunities in Indian's financial industry and such.

This will only help to enhance the ever rising salaries and bonuses of the top management of these entities, the elite cronies of PAP.

These are the crux of the matter, not so much about "free trade" alone, lest about jobs creation for Singaporeans.

A Lesson from US Presidential Contest - A Robust Democracy

Thought of the Day

Folks, it is NOT END OF THE WORLD to have President Trump! Unlike Singapore, US has a more ROBUST Democratic political system with Separation of Powers institutionalized and embedded to effect REAL Checks and Balances. No matter how moronic or idiotic the President is, he or she will be checked and prevented from doing too much bad!

An idiotic or moronic President may not do much good, but at least for the next 4 years, he or she won’t do too much bad as well. 4 years later, if he could not perform or basically screwed up, the voters will just kick him out!


So instead of feeling devastated for Trump victory, we should learn something from this saga: It is more important to build a robust political system which has Separation of Powers institutionalized to effect Real checks and balances instead of betting on the hope that we could always choose wise and good guys into government!

The Rubbish Bin and Aim-less Standards

Thought of the Day

The Rubbish Bin and Aim-less Standards

Politics is not just about Anti-Whichever Party. It is the selection of both parties and individuals who are relevant to our ideas of how the country should be managed and run. It also involves in choosing the parties which will set up a proper system which we desire.

In short, whichever political party we support, it must perform the two basic functions:

In the Democratic system we desire, we would understand that nobody is perfect and thus, proper Checks and Balances should be installed, in whichever means. For me, I chose to believe that Separation of Powers is paramount in effecting Checks and Balances.

What WP has erred, is a serious breach of my belief and I hope, it is your belief as well. It is ok to make mistakes as in our belief of Democracy, we expect human beings as imperfect and the tendency to make mistakes is perfectly normal.

However, WP has shown that it refused to admit the fact that what they have done is a serious breach of trust and Democratic principles. They are recalcitrant in every aspects. Do I want to show any support to such a party which does not even know where it had done wrong or plain refusal to admit its own wrong doing? Nope. Not for me.

Can you defend WP in any way? Yes, you can, but only when you throw away your Democratic belief, throw away any high expectation of Moral standards and Integrity. You can do that by using the Rubbish Bin Standards to justify the over payment of consultancy fees to their own people, FMSS. You can justify their massive conflicts of interests by using the AIM-less Standards.

However, what will that make you to be? You are lowering the standards which we expect any political administration to maintain, to such despicably low standards. The Rubbish Bin and Aim-Less standards. You have to give up the higher moral grounds which we depend upon to keep PAP in checks, just to defend WP.

What will that bring us to? We will degenerate into a dysfunctional Democracy whereby both ruling and opposition parties are as filthy as the shit hole. There are many such dysfunctional Democracies around the world and we won't even be unique in any sense. We will be spending time to hurl insults of "You also like that!", "You are corrupt too!" etc etc and nothing gets done, and Public Interests will definitely be compromised in the end.

Each and everyone of us will have to decide for ourselves, whether do we want to accept the Rubbish Bin and Aim-less Standards as the norm or we have to get it right, do it right from the start. I for one, will refuse to be dumped into the Rubbish Bin standards.

The implications of discarding the Moral High Ground and adopting the Rubbish Bin and Aim-less standards are really vast. It is not just about WP anymore. It is about your life, my life, our future generations' lives.

You may think that we should save WP's seats in parliament is something we must do at all cost. You may think that this is the only way to save whatever little "Democracy" we have, as in having an opposition in parliament. But I guess we must first understand the FULL Cost of doing so. The Full Cost, is the Total destruction of our Democracy development process, ironically speaking. It will derail our aim of building a functional Democracy. It will encourage crooks and charlatans to infiltrate into our political system because they see that they can just get away with their greed EASILY just because they have this little label "Opposition " put on their foreheads.

If you wanted that to develop, that's your choice, but not mine. I would rather we have a proper cleansing and rebuild everything proper right from scratch again. It is painful in the short term, but at the very least, we can be sure whatever fruits we will get later, will not be toxic, not only for us but also for our future generations.

I take my Mission and Vision very seriously in opposition politics. These have never changed from the very day I decided to step into it. But I won't stop anyone to disagree with me nor my methodology. Each of us will always have the choices to make. You may disagree with me and I don't intend to have everyone to agree with me, but I only ask for your understanding.

Ultimately, if you don't clear off the rubbish, you will always stuck sleeping with the rubbish dump. I chose to clear the rubbish, no matter what it costs.