Recently there are quite a few "home produced" political Music Video posted on the net. The above is one example, taken from Taiwan Anti-Chen Xiu Bian protest rally. This is very professionally done.

I believe the music is original and specially created for the Anti-Chen Xiu Bian protest. Quite a nice piece of song.

We do have a couple of local "political MV" created by individuals on Dr. Chee's Protest Rally held on 16 Sept 2006.


I would say that these two video's editing is quite good for amateur standards but the only problem is that it does not use their own original music or strong. Instead, these two videos use two Hokkien songs which may lower its impact in the internet context.

I was taught that creativity flourish best during period of "dreaming" and "romance". It does not necessarily restrict to boy-girl relationship but rather a state of mind in which one yearns for something very much although it may be almost "impossible" to get or achieve at that point of time.

Taiwanese has been through decades of "political struggle" to achieve its state of democracy and this is almost done with people who dare to dream the impossible. Just 18 years ago, nobody could even imagine Taiwan could possibly be ruled by a politial party other than KMT but it happened just one decade later.

However, after six years of DPP rule, the old dream though fulfilled, has been totally demolished with the many corruptions charges brought against the ruling party members. A new dream is born with the old one demolished. A dream that peaceful non violence protest sit in will force out the elected President Ah Bian.

Singapore used to be a land of cultural blossom during the period of 1950s till mid 1960s. During that period of struggling against colonial rule, many fantastic poems, playright had been created, especially by the Chinese educated. Many of thsee plays are either banned and their writers jailed or bannished to foriegn land because they were deemed as "communist" in nature. The only eminent writer Guo Bao Kun (郭宝琨) has passed away. And we have never seen an archive of our past cultural heritage compiled. It seems that we have all lost that piece of collective cultural memories altogether.

Even up to this day, when we try to express our political dreams via the cultural form, we have practically lost that art of articulation but have to "borrow" pop culture to do it.

I have seen some ray of hope when I read Xeno Boy blog because I find that "cultural sense" in his writing. Very articulate way in his very own style and insight. Poetic sometimes and yes, poets are we lack in our political culture.

I do see some hope when there were some individual play groups starts to venture into social-political dimension. When I was stil in Junior College, I was quite delighted in some of the plays performed by some Chinese based performing groups. But somehow, it seems that "black humour" type of movies are more popular nowadays. I have nothing against "humour" but it seems that it lacks the refine approach to cultivate or present certain idealism of human minds.

Poetry, music and plays are powerful combination in moving souls and minds. It could be thought provoking and awaken the political consciousness that has been suppressed by one reason or another.

I always believe that a Nation or society should develop in a balanced way, not neglecting any of the four pillars of composition: social, culture, politics and economics. It seems that we as a nation under the leadership of PAP, has put all emphasis on economic development while neglected the other three aspects of this society.

Poetry, music and plays are powerful combination in moving souls and minds. It could be thought provoking and awaken the political consciousness that has been suppressed by one reason or another. But it is precisely that these expressions could be "potentiall dangerous" to cultivate "diversity" in political thinking that they have been deliberately suppressed or marginalized. Censorship is exercised thoroughly on any kind of expression that may involved "political sensitivity". A decade ago, such censorship is quite pervasive. I am told that at present days, they have somehow relaxed in certain aspects. However, PAP has used another law to suppressed political expression or rather, creativity... i.e. the political film act.

The lack of cultural depth is obvious by simple comparison of these MVs. Both are using pop culture medium but the depth of expression is vastly different. Could we do better or cultivate the "spiritual" dimension of our people if we continue to censor political expressions? This is something we need to ponder about as a Nation.

Afternote: Haha.. someone responded to my article here by emailing me this link to a "local favor" MV. Although the recording of the original song by the author is not perfect but I think it is good effort anyway. ;)
Posted by Admin at 8:36 PM 13 comments: 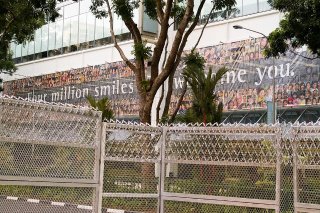 Many people have asked me whether it is "worth it" for Singapore government to spend over $100 million to play host to IMF - World Bank meeting while our citizens have to suffer another round of public transport fare hike?

I think we must look at the objective of hosting the IMF meeting before we could decide whether it is worth while for us to spend such money. In my view, hosting the IMF meeting is a branding exercise for Singapore. PAP government is trying to sell Singapore as the top choice MICE i.e. a place for Meetings, conferences and exhibitions to the whole world. If the IMF meeting is successfully organized here, it will argur well for us as a Nation. Singapore does have the necessary infrastructure and efficient system to position ourselves as a place suitable for international organizations and businesses to hold their conferences here. There are great benefits and opportunities for us in the long run if we have managed this IMF meeting well. This is a strategy in line with PAP's intention of building of the Casino resorts.

Unfortunately, PAP government has tripped itself numerous times in organizing the IMF meeting. The most fearful thing for a branding exercise is bad press and public relations disaster. This is something that PAP lacks good understanding. Maybe it is due to its long entrenched position in Singapore where the local media is in its absolute control. Local media will hardly give it bad press or create a public relations disaster for the PAP government. In such a "comfortable" environment, it would be very difficult for PAP to cultivate its Public Relations skills and thus it becomes very PR unsavvy.

First of all, PAP government should not have agreed to host the IMF meeting at all in the very first place. Branding needs consistency not only in its messages but in its structure as well. IMF meeting is well known for the accompanied street protests by social activists which may turn violent at times. This is totally incompatible to PAP's political culture or tolerance. I was furiously shocked when Mr. Goh Chok Tong said a couple of years ago that we may allow foreigners to hold street protests in Singapore during this IMF meeting. This practically means that Singaporeans would have become second class citizens in their own land because the PAP government has hardly issue any permits for its citizens to hold street protests in its rule, even though our constitution and law have provided such rights to us. I have taken the trouble to write a personal email to IMF, urging them not to hold thier meeting here for this particular reason. On hindsight, I should have been more persistent. True enough, SM Goh Chok Tong did a U turn and said just a few days ago that one of the primary reason why Singapore banned those NGOs and CSOs from conducting street protests during this IMF meeting is that they could not afford the political cost of discriminating against Singaporeans.

Secondly, the constant harping on the threat of terrorism to justify its refusal to allow some of the accredited activists to attend the IMF meeting does more harm than good to the branding exercise. If the main objective of this branding exercise is to attract more international businesses to hold their conferences in Singapore, the last thing you would do is to scare them away by saying we are constantly under terrorist threats! Those intimidating barb wires and steel walls built around the venue, Suntec, is not helping at all. It sent a mixed signals to the world that they will only be safe conducting their meetings in a cage like this!

The most critical blow come from the President of World Bank himself. His remark about Singapore Government renegades on the MOU signed three years ago has created tremendous damage to the standing and the reputation of this country! Although the PAP government tries very hard to justify its actions but the enormous damage has been done. Who wants to do business in a place where even the government could breach an important MOU with a big organization like the World Bank?

I guess no amount of huge posters with smiling faces will make us look good at the end of the day. The branding exercise is a total failure and I would say that those millions spent have been wasted. What we get in return is not a good brand name but bad press and bad reputation! What we are witnessing now is a self proclaim First World Government in a First World public relations disaster! Sigh.