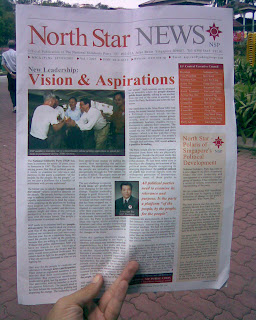 The National Solidarity Party has finally relaunched its party organ, renamed "North Star" instead of "NSP Newsletter". NSP has not only changed the name of its newsletter, we have also given it a brand new professional look.

This is part of the ongoing effort by NSP in trying to embark on a massive transformation of its political platform. I am proud to be part of this effort of transformation. In the months to come, there will be more changes, major as well as minor ones, to be made to the whole party platform. The following is one of the article published on the first issue of North Star:

National Solidarity Party has come to a new phase in its effort of renewal. Under the new leadership and management of a relatively younger group of leaders, it has embarked on a series of reform, restructure and repositioning of the party.

We are relaunching NSP Newsletter as North Star to signify a major milestone of change in our party's development. Why North Star?

The best known star that one could possibly identify from Earth is Polaris, which is commonly known as the North Star. Its position will hardly shift according to the change of seasons. As such, it has been the most important star since ancient time that human beings have depended on for their navigation through land as well as sea during the night. It is the guiding light for those in darkness for centuries.

Our party's logo is actually the Polaris which appears in compasses. It symbolizes our commitment to provide the necessary guiding light and direction for Singapore's political development, from an era of total darkness towards a brighter future. Two decades ago, when NSP was inaugurated, Singapore was immersed in an era of total political darkness.

The People's Action Party has entrenched its monopoly of power for decades and it has used every means to protect its strong grip over its power. In comparison with the active participation of social-political activists of the 1950s as well as 1960s, the deafening silence of such political activism in the 1970s and 1980s was a sign of political regression. In spite of strong economic growth and development, our social, cultural as well as political developments were totally neglected.

It was under such circumstances, the National Solidarity Party was born. We have the aspiration of playing a constructive role in rebuilding our political system towards a more balanced, democratic and matured system that is truly inclusive in nature. We believe that a monopoly of power by a ruling party is unhealthy for the Nation in the long run. We believe that there must be checks and balances installed in the whole political system in order to safe guard the citizens' welfare and interests at all times. We believe that there should be more diversity of voices and cultivation of more citizenry participation in our nation building effort instead of being dictated by the ruling party alone.

What we have observed throughout the two decades is that the ruling party, People's Action Party, is not totally open to criticisms. It has used its dominance in parliament to implement changes to the constitution of Singapore to further entrench its monopoly of power. PAP has admitted that without the GRC system, it will not be able to prevent some of its seats from losing to the opposition. It has admitted that only with the GRC system, its new candidates will be able to get into parliament with the help of its heavy weight ministers. It has also used its dominance to redraw electoral boundaries to its maximum advantages. It has even used HDB upgrading as a form of pork barrel politics to win votes during elections., openly warning voters that their flats will not be upgraded if they do not vote for PAP during the election.

PAP has evolved from the iron fist, strong hand tactic authoritarianism to the seemingly “softer”, sophisticated technical authoritarianism. Such technique has successfully allowed the ruling party to sell unpopular policies such as the GST, increased pricing of HDB flats etc. However, this is still nothing lesser than a monopoly of power play.

We sincerely hope with the support of Singaporeans, our party could continue our long quest towards a better Singapore with a stronger entrenchment of democracy instead of the entrenchment of authoritarian rule. We also hope that with our North Star shining and guiding our political spirit of true democracy, Singapore will enjoy a progressive development in our political system whereby each and every Singaporean's welfare and interests will be taken care of.

If you are interested in getting a copy of the North Star, please get it from our weekly walkabout for $2.00 per copy.

Email ThisBlogThis!Share to TwitterShare to FacebookShare to Pinterest
Labels: NSP

Well, the title says it all! The local English papers did not carry the following NSP press release even though the Chinese Zaobao did put up a column at the bottom on one of its page.

The National Solidarity Party (NSP) shares the frustration of the public over the NKF issue which has dragged on for more than a year. The high public expectation in extracting justice ended in the incredible jaw-dropping development where Richard Yong, a key player in the NKF saga, fluidly escaped the gazes of the authorities, and fled Singapore while owing a huge sum of public money to NKF whilst being declared a bankrupt.

We are outraged over how “a matter of hours” of lapse by the authorities has practically brought down 4 decades of efforts in cultivating a public spirit of spontaneous charity. The social repercussions from a collapse of public trust in institutions meant to safeguard their social interests are simply immeasurable.

It is a total disaster when a defaulter of public funds slips through the tight law-enforcement net without undergoing the due punishment. Every such ‘success’ story emboldens more law-breakers to test the authorities, and impose further duress on the security of the nation.

The repulsive event further deteriorates what remaining sense of generosity there was in Singaporeans when the NKF incident first came to light. It also inevitably erodes public confidence in the ability of the relevant authorities to execute their duties diligently and responsibly.

The lapse is all the more lamentable considering that the defaulter had a few months earlier divested his private properties for a personal gain of $7.5million, and attempted to dodge the authorities by not reporting his whereabouts. Despite the cues, the authorities had not taken tighter precautions.

The frivolous approach of the authorities is inexplicable, considering how the authorities have the track record of freezing assets of defendants in sensitive legal cases even before their convictions.

The incident has made a complete mockery of the nation’s proclamation of good governance, further strengthening the case for the need of checks and balances, and more transparency in matters of grave social concerns.

On behalf of the indignant public, the NSP would like to know what measures the authorities are going to take to satisfactorily remedy the situation, and recoup the public’s hard-earned money donated through an innocent sense of trust. The authorities owe the public a thorough and convincing explanation for the “extraordinary” oversight.

Until the necessary justice is administered, public cynicism will gain in strength to threaten the precarious social coherence. Together with Singaporeans, the NSP is keen to see an acceptable closure to the saga, and nothing less will do.

During this period of reservist training, lots of things happen:

1) Our soldiers died in the Taiwan air planes crash

3) Richard Yong, ex-NKF Chairman who is the key player in the charity's scandal reportedly "disappeared" right after he was declared a bankrupt

All these happen during my reservist training period. I do have things to write about all these happenings but alas, most of the time I was too tired during this period.

I have an opportunity to question one of the most relevant officer involves in manpower about the compensation of those who died in the tour of NS duty. This is after reading what was reported in online news about our Defence Minister making remarks about "being realistic" in the compensations for the dead soldiers. Frankly speaking, I am very pissed off by such insensitive remarks and I think Singaporeans should tell the ministers to be "realistic" about their annual salary too!

Yes, no amount of money would be enough to compensate the loss of life; the loss of the love ones. However, it has bigger implications than the amount of money paid off. It affects morale of the men and women serving the country. I could really imagine how my men would say to me in future in camp training, "Sir, be realistic lah, if we work too hard, too siow on (on the ball), if something happens to us, the Defence Ministry will just tell us or our family members to be 'realistic' about compensation! Who will take care of our families? Better play safe, take it easy and not too seriously..."

As for the NETS rate hike, it is the most unbelievable "reasons" I have read so far! Well, I will leave it to the people to judge whether such reasons are justifiable or not. But it does bring back a subtle point I have been telling my course mates that as an economic trained individual, I HATE MONOPOLIES, be it in economics or politics. If we really have no choice but to be stuck with natural monopolies, then they must be regulated.

As for the "prolonged" NKF saga, what many people feared has finally come true: one of the key player of the scandal has fled the country after being ordered by the court to pay legal compensation amount to a million to NKF. The funny thing is this, since Richard Yong has sold his properties for $7.5 million, by right he would have the money to pay NKF the $1 million. He chose not to pay and wait to be declared bankrupt. And yet, he did a last minute stunt of fleeing the country on the day he is being declared bankrupt? It is so dramatic! Anyway, NSP has just released a press statement on this incredible incident.

Finally one good news. Long time political veteran fighter Mr. JB Jeyaratnam has been discharged from bankruptcy. He has announced plans to start a new party, called Democratic Reform Party. Congratulations to JBJ and his comrades!

This will roughly sums up the main issues happening during my period of reservist training. This period of time is also a good time for me to take leave from my political involvement for a while, so to have more time for reflecting on some more important issues. It just happens that the course I have attended during this period provided me with great amount of inspirations.

I will sum up my learnings and new insights in my next article, "CORE VALUES". This one will be an important piece of writing of the year.