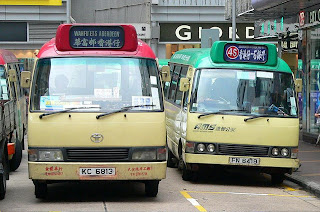 I was quite amused by Finance Minister's Budget statement for this year even though I wasn't really paying much attention to it. The spending of $1.1 billion on buses for private transport companies (providing public transport) stands up like a sore thumb among the lengthy budget statement (as usual).

I waited for some a couple of days to see whether the other opposition parties have anything to say about this one but unfortunately, I hear nothing about this from opposition parties so far (well, please update me if I am wrong) amidst some comments made by people writing to ST forum and bloggers like Lucky Tan.

PAP has started its privatization of government assets and companies in late 1980s and 1990s. Vital strategic assets like telecommunications, public utility as well as public transport companies were all "privatized" amidst the fact that the government still maintain as major shareholders of these companies. It isn't really a clear cut kind of privatization but when these companies want to raise tariffs and fares, the excuse that these are "private companies" which will have to make profits is always used to justify such moves.

Some opposition parties like Workers Party has called for the Nationalization of the public transport companies (i.e. Comfort Delgro/SBS Transit, SMRT). Other opposition party like National Solidarity Party has called for more liberalization of the public transport sector which it believes more competition will help to keep the whole system more efficient and hopefully, more cost effective for commuters. PAP government has resisted both calls.

Due to the ill-conceived explosive FT policy which jack up the population rapidly over the decade, the public transport system has come under tremendous strains. Last year major break downs of the MRT train system has set the major alarm that the train system has been overstressed. The mid-term strategy would be divert the heavy use on MRT to the bus system before it could come up with a comprehensive plan of solving the congestion in the train system. Buses operating parallel to the MRT services will be needed to provide alternative mode of transport to the train.

PAP's controversial plan of pumping $1.1 billion taxpayers' money into the bus companies to help them increase their buses (550 buses at $1.1 B = $2 million per bus! Really overpriced.) is a desperate move to help solve the congestion problem. However, it is done without much serious thought on the implications. This move will open up the can of worms for future government to justify spending public money on "private companies" as a form of subsidy. It has broken PAP's own golden rule of "market principles".

Some PAP minister has commented that by spending $1.1B to help the transport companies, it will help to "prevent fares" from increasing so that the commuters will not suffer. First of all, Singaporeans had already suffered once the public money is spent because the money comes from everybody, via taxation like GST and Income taxes. Furthermore, if the companies are to raise funds to invest in these buses, these buses would generate revenue and profits to pay up for the initial capital cost in terms of depreciation. If PAP is serious about "privatization" and adhering to market principles, it should allow these companies to function as it is. Especially so when these companies are already enjoying monopoly power and domination over the public transport sector.

For private companies, especially for public listed companies like SMRT and SBS Transit, there are numerous ways of raising funds from the financial market. They could issue bonds or issue more shares. They could borrow from banks as well. There are no lack of financial tools for them to meet their needs.

If the government is to spend over a billion on these companies, it must well nationalize these companies! Else, how could it account for the taxpayer's monies spent on private companies for them to make more money?

The other option is to liberalize the public transport industry. New investors may be interested in breaching the gap of demand and supply.

From an overall strategic view, Singapore has too many taxis per capital than Hong Kong. The main reason for such phenomenon is due to the existence of two types of Minibus system in Hong Kong which covered the needs of the middle class in providing a mode of transport which could rival taxi services.

In terms of efficient use of limited resources such as fuel and public roads, minibus proved to be the preferred system than taxi. Each Minibus could carry 16 passengers at any one time while Taxi could only carry 4. Most of the time, during peak hours, taxi normally carry 1 passenger who rush for work.

Taxi has no fixed timing and routes which make it ineffective at certain times. During certain hours, you could hardly find any taxi available due to changing shifts or taxi waiting for change in surcharge to kick in. The Dual-Minibus systems in Hong Kong provide a stable, cost effective and efficient alternative to the taxi system.

The Red Top Minibus system provides the comfort of seating as well as flexible alighting and boarding points along the routes at a very reasonable price. The Red Top Minibus drivers could switch routes according to peak and off-peak hours. This provide stable and yet flexible adjustment to demand due to different timing.

The Green Top Minibus system has more fixed time tables and routing as compared to the Red Top Minibus. It serves those less travelled routes or unprofitable routes well, especially those private estates at a slightly higher fare.

I believe Singapore needs to cut down on the reliance of taxi or even decrease the number of taxis by substituting it with the more cost effective and resource efficient Minibus system. The minister of transport should come up with more effective strategic plans instead of just throwing more money into private transport companies.

For a start, the population of taxi should be curbed/reduced and taxi operators should be encouraged to divert resources to run a comprehensive minibus system. This will relieve the strains on the road network as well as the train system.

LTA has spent much time studying the Hong Kong model but it seems too reluctant to come up with a comprehensive public transport plan to overhaul the present system. It is totally irresponsible for the Ministry of Transport to take the easier way out by throwing more money instead of thinking long term and the overview of the whole system.

Goh Meng Seng
Posted by Admin at 12:33 AM 6 comments: Links to this post

Workers Party may split if Yaw Shin Leong decided to challenge the expulsion decision. I seriously hope my analysis is wrong and such situation could be avoided but there is a high possibility of a split if things don't turn out right. Of course, I would expect a lot of WP members and supporters attacking me for this article but I also hope that they could read it with an open mind and maybe, it could have made them realize unity within the party is what they really need now.

Loss of Two Core members with high support within

Since last General Elections held in 2011, WP has lost two key members: Eric Tan and Yaw Shin Leong. Eric Tan resigned from the party after he felt betrayed by the party leadership when the NCMP seat was not assigned to him, who is the leader of East Coast GRC team. Yaw Shin Leong has been expelled for his refusal to answer to allegation of adultery made against him.

Both Eric Tan and Yaw Shin Leong have very STRONG support base within the party cadre. In fact, they have the highest vote of support from the cadre members during the Ordinary Party Congress among those voted into CEC (The Chairman and Secretary General posts were uncontested) back in 2010.

Both Eric Tan and Yaw SL have led GRC teams in GE2006 and naturally they would have garnered respect and support from the cadre members.

For the party to lose two of the important CEC members, who had garnered top support from the cadres, within such a short span of time would post a big challenge to the current leadership to explain convincingly on why it happens.

When the Yaw-gate first brewed, I have made several comments on how it should be managed and what went wrong subsequently. However, it seems that WP members and supporters are only concerned about short term interests instead of looking at the issue on a more matured perspective.

This is a worrying sign for WP. It indicates the lack of political acumen on the party members to understand the real issues behind Yaw-gate. More importantly, they are blinded by their loyalty to the party, instead to the core values of opposition.

What is more worrying to me is that some of the WP CEC members actually voted against the motion to expel Yaw SL. (WP confirmed it is not an unanimous decision.) Any seasoned politician would realize that the longer Yaw-gate drags, the more damage would be done to WP as well as the whole opposition movement. Thus it seems that these CEC members are most probably more emotional than rational when they cast their votes of objection.

The apparent lack of political acumen among WP members and CEC members would be a source of instability.

Any and every political parties will have factional internal dynamics. This is a fact of politics. However, I should caution political players that excessive politicking may just backfire on everybody.

It is a worry that factions may make use of this issue to create a situation which benefits their agenda within. Especially so when members lack good political acumen to make good judgement on what should be the right and good decision for the party.

Imagine what will happen if Yaw SL decided to challenge the expulsion and request for an extra-ordinary party congress?

The cumulative effect of Eric Tan's and Yaw Shin Leong's departure cannot be under estimated. Unless there is pro-active effort from the key party leaders to manage perceptions and expectations within, WP may risk big internal struggle or even a split which will affect its overall image.

I sincerely hope that young cadre members of WP would look at things from a macro level. It is unfortunate that Yaw SL has done something very selfish and risk creating great damage to WP. Keeping quiet is not an option under such circumstances.

WP's crisis is not over yet. PAP will drag on for the Hougang by-election with the hope that WP internal strife will break it. Unity is the most important for WP to overcome such difficult time. You should be wary of those who wants to use Yaw-gate as the main issue to attack the leadership. It is the best decision Low Thia Khiang has made, though it is made a bit late into the saga.

Goh Meng Seng
Posted by Admin at 10:28 PM 8 comments: Links to this post