Why I join WP?

I am going to disappoint my reporter friends here but I will delay my remarks on the "time bomb" & " poison" issue till later post.

The following is my response to a fellow forumite in SGpolitics forum with regards to why I join "opposition" party when it seems that we will be fighting a "losing battle".

I think this is a good question. The battle could only be lost if your mind has already surrendered. Look at the Vietcongs in the Vietnam War. Nobody back then in the early days of the Vietnam War could ever imagine the almighty US Army would lose the war. The Vietcongs, in your very own words, were fighting a losing battle.... at least that's what everybody back then thought. On hindsight, everybody now knows that it is not the advanced weaponry that will help anyone to win the war, it will be the "mind" that will determine the outcome of the war.
As for why I want to fight a "seemingly" losing battle, I will put it in four simple forms:

I have been active socially in various ways back from my schooling days till I join WP. It takes a gradual path from social consciousness to cultivate the political consciousness. Believe it or not, I was active in community centre back then. After being disillusioned by this "grassroot organization", I volunteer myself to charitable organization. Why disillusioned? Mr. Low's reply to the grassroot leader has explained it all. The fact that these grassroot organizations being totally "politicised" make someone like me (back then) who are not interested in PAP politics but just want to serve the community feel totally disgusted.

It was in 1997 GE when PAP brought up the HDB upgrading as "carrots" for voters to vote for PAP that invoke my great sense of social justice. I was outraged basically because such moves will destroy Singapore as it sets the social atmosphere into a totally individualistic and materialistic one. I do not want my future generation, especially my children to be cultivated under such social structure and atmosphere of materialism. This is the first seed of political awakening for me.

In 2001, PAP's further pepertuation of HDB upgrading with "PRECINCT COUNTING" irks me. I was debating with an old PAP veteran in soc.culture.singapore about why PAP's "time bomb" should not be allowed to continue, he challenged me that why would I want to support an opposition camp that does not seem to have any "working faculties" at all. In my heart, I wanted a more balanced and diversed democratic system but my head tells me that that PAP veteran has a point.

Thus the only logical conclusion for me is that I will have only two options left:

1) Shut up and prepare to migrate out in order to find a better place with a better social atmosphere to nurture my children and future generation.

2) Join the alternative party and make it works.

After a week of pondering, I decided to join Workers' Party and the rest is history.


[quote]Originally posted by ahtansh:[b]With Goh Meng Seng starting this thread. I really would like to know, what drive him to be an Opposition and since he has put it as being unfair and not right for the ruling party to change their plans. Its going to be a losing battle. So how he motivate himself?[/b][/quote]
Posted by Admin at 12:35 AM 8 comments: 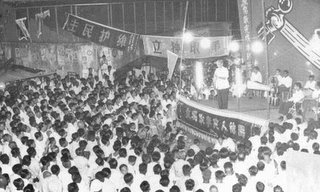 Recently, talks of elections have been heated up again after SM Goh Chok Tong "hinted" that elections will be held before 2007.

The mass media has begun to drum up the election fever by all sorts of election-related reporting. Guessing the dates of polling day, put up reports on where alternative parties are going to contest, raise Singaporeans' expectation of the "good fights ahead"....etc etc.

The PAP government has not stop pushing through goodies after goodies, from multi-billion HDB/ estate upgrading plans to billion dollar "Workfare" up to "bonuses" for NS men etc etc.

Amidst all these rustling of the impending General Elections, there is a growing number of Singaporeans young and old, voicing out for more contests and leveled playing field. They basically WANT TO VOTE! Some of them lamented that they have not voted even once in their whole life!

For whatever reasons, Singaporeans like to exercise their "POWER" to vote. Voting is a way of participating in the electoral process which may help to develop a strong sense of ownership of this country. However I would say that voting is NOT THE ONLY WAY for one to participate in the electoral process to cultivate that sense of ownership. Every Singaporeans who are eligible to vote could well choose to volunteer themselves to be polling agents, counting agents, election agents as well, regardless of whether they could exercise their voting rights or not. If their constituencies are being contested, they could further enhanced their participation in the electoral process by coming forward to volunteer themselves to be nominators, seconders and assenters.

There are absolutely no reasons for any Singaporeans to complain about the lack of opportunity in participating in the electoral process to gain the sense of ownership to this country, even when their constituencies are not being contested. It will take a little bit more of their courage and willingness to step forward and be counted in the electoral process. 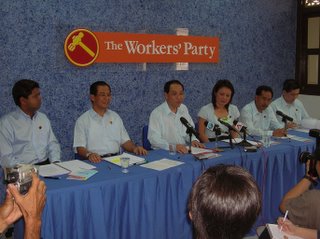 From left: James Gomez, Dr. Poh Lee Guan, Low Thia Khiang, Sylvia Lim, Mohammed Rahizan bin Yaacob, Tan Wui-Hua
For any political party in the world, it is inevitable that it needs to engage the press and local mass media to maximize its public outreach. Holding Press Conference is one important way of getting political messages and ideas across to the masses.

In Singapore's context, we all know how bias the local media could be when it comes to political news and reporting. I am a very keen observer of local mass media reporting of local political news. For the last election in 2001, it was really an eye opening experience to see how skewed and bias the local mass media could be in putting up the WORST shots on alternative parties they could get from rallies or walkabout to put up on newspapers and prime time TV news on all channels. We have Dr. Chee's close up shots of his shouting incident, TV shots on the falling of chairs and speakers during one of SDA rallies, TV shots on a man wanting to go to WP rally stage and speak but was wrestled away by police, shots on candidates stretching heads, shots on the commotion and SDA supporters stopping buses and vehicles to paste SDA posters on them....etc etc.

A picture speaks a thousand words, a stream of films speaks a million words! It is important for us to learn how to make use of every opportunities provided to put up the BEST images to the press so that they could take good camera shots from whichever angle they choose to.

The recent press conference for our launch of Manifesto 2006 is pretty successful in the sense that we have managed to improve on the image front for good camera shots. Take a look at the following photos which were taken last year on 5 March 2005 for Casino Forum and 15 Oct 2005 Youth Wing Forum. Make a comparison with the photo above, taken on 14 Jan 2006 Launching of Manifesto.
5 Mar 2005 Casino Forum 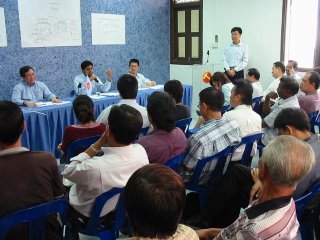 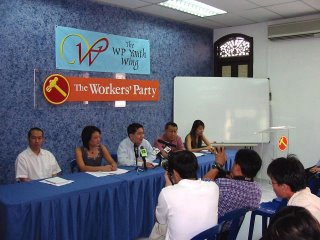 From Left: Michael Cheng, Sylvia Lim, Tan Wui-Hua, Dr. Kelvin Tan, Glenda Lim
I hope you see the vast differences betwen the three photographs. We have come a long way to learn and progress from the amateurish set up to a more professional image. We could observe that in the first public event, CasinoForum, that we held in our new HQ in 2005, the setup of the "stage" was not properly done. The speakers (yes, including me in it) were not seated in a conducive way for good photo shots. We were all seated too "spread out" and it would make photos produced to become "loose shots". Furthermore, the party logo and wording was not up yet. If it wasn't for the charts that I have put up, the back would look very bare.

For the Youth Wing Forum, we have improved tremendously by putting up the party logo and wording. However the sitting arrangement is still a bit loose as there was a gap between Michael Cheng, our guest speaker, and Sylvia Lim. Furthermore, if you observe carefully you would be able to see there is a vast difference between the photo on Manifesto Launch and the Youth Wing Forum. Although both photos are taken with the WP logo and wording at the back, the distance between the heads and this logo are different in the two photographs. Loose shots could occur by having people spreading too far from each other. It could also occur when the distance between the people and the object of interest (in this case our logo and wording) is too wide apart.

From a camera man's point of view, it is difficult to get a good camera framing or shots when the distance between the object of interest is far away from the people who are also the focus theme of the camera shot. You would feel that the first photo on our Manifesto Launch looks good at first sight but most people cannot explain why it looks better than the one on Youth Wing Forum. If you have seen the photographs published in the local newspapers or the TV news report on the Manifesto Launch, you would feel that the images are "good" as compared to previous coverage of WP's forums without knowing exactly why. The reason is very simple. Under the environment that is within our control, we try to do our best to fine tune the setting so that it could provide us with the best camera shots. If you click on the various photographs to enlarge and observe carefully, the main difference lies in the chairs the various individuals are sitting on!

The new chairs that we used in the Manifesto Launch are able to provide a "higher" seats to all the speakers on the panel. It provides adjustable heights to each different individuals so that they could adjust their seats according to their heights. If you look carefully you would find that the "head level" of each of the speakers in the Manifesto Launch are basically quite even compared to those in the other two photographs.

It is a common "camera trick" for studio or film makers to "adjust" the heights of those involved by various means; eg, adjustable chairs, wear high/low heels or simply put planks for the shorter one to step on it. Thus it is also important for us to learn how to make adjustments to the environment under our control so that we could present the best images for the mass media. 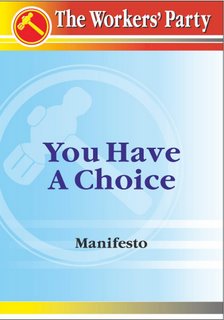 The long awaited Manifesto of Workers' Party has been successfully launched on 14 Jan 2006. There are 52 pages which included 14 chapters that cover almost all aspects of governance in all the ministries.

The following is the outline of the Manifesto:

Chapter 3: Economic Policy
3A. SMEs and Local Businesses
3B. Potential Sectors of Growth
3C. Others