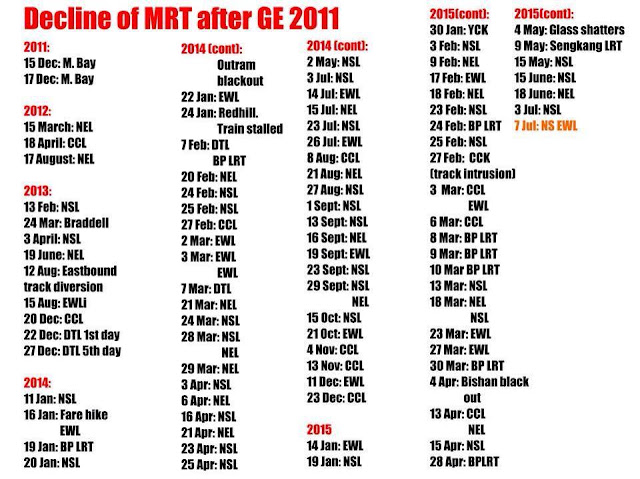 The massive breakdown of MRT North South and East West lines has infuriated lots of Singaporeans. While PAP government, LTA and SMRT boast about how much improvement the train system since the new CEO has been appointed, numerous breakdowns big and small have been occurring over the years almost as a monthly or even weekly basis. This is despite of numerous increase of fare and pumping in of taxpayers' money into the train system.

What went wrong with the whole MRT system? We used to pride ourselves to have one of the world's most reliable subway system but now, we are suffering from a highly unreliable train system which is constantly breaking down or suffering from delays.

There are a few dimensions of this problem and one of it is of course the over population which inevitably over burden the system which was initially designed to serve only a population of 3 million. PAP's over ambitious and aggressive population policy has worn down the system faster than it was designed for.

Unfortunately, while the train system was facing such unprecedented over-strain, PAP government has appointed someone who may be good in retail business and well connected to the top powerful elites but has absolutely ZERO experience in running a train system. This woman, Saw Phaik Hwa, was the most disastrous CEO PAP Government has ever appointed and the fundamental root problems of the whole MRT system was nurtured and cultured during her era. 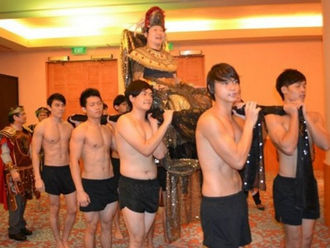 The only thing PAP and Saw had in their minds was to squeeze and milk maximum profits from the whole train system. While Saw was good in turning and transform space in many MRT stations into retail rental space which helps MRT to gain enormous profits out from rentals, but she had at the same time cut down maintenance budget for the train system in relative terms to further squeeze more profits. In fact, her whole management focus was on retail and maximizing profits. This could be seen from the various people she employed whom are her former colleagues or associates in retail business. In doing so, it is inevitable that maintenance standards has dropped drastically with more experienced staffs being replaced by cheaper foreign labour.

Imagine that while we are facing an over strained train system, lesser resources were channeled to maintenance services. This further aggravated the situation and it is only a matter of time the whole system will break down.

In short, MRT under Saw, with PAP blessing and approval, has gone overdrive to milk the whole MRT system in the expense of proper maintenance needs. This single minded pursue of profit maximization compromised safety and reliability of the whole train system.

Thus, when MRT has its first major breakdown, all blames are pointed to Saw. Thus, Saw resigned and the rest is history.

When we thought that with the departure of Saw, PAP government would have learned their lesson and take public transport reliability as their top priority. In view of the challenging time SMRT was facing back in 2012, PAP government should have looked for somebody who really has the relevant experience in running a subway system to look into the teething technical maintenance problems but it failed in doing so.

Instead, PAP government put a formal Army Lieutenant General Desmond Quek who also has absolutely Zero experience in running a train system to be SMRT CEO. 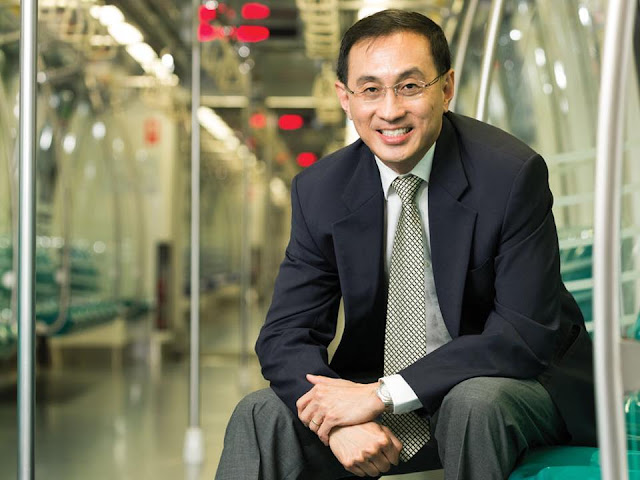 While the new CEO is good at boasting about how much improvement the train system is after he took over as CEO and increasing his own salary disproportionately to the growth of SMRT earnings, but by the hard true records shown on the list above, we are still facing INCREASING disruptions and annoying breakdowns of the train system! This is a fact and the problem may become worse when more MRT train services and lines are added into the whole system.

What Desmond Quek is seen to be good so far, is to constantly ask for more fare increment and injection of funds by the Government (LTA) while he continues to increase his million dollar salary.


Thus we can see the fundamental problem of MRT system very clearly. While there are external factors like explosion of population which causes the train system to wear out faster than it is designed for, the real fundamental problem is GREED in profit maximization and the totally unprofessional appointment and management of the top leadership by their own kakis.

SMRT is an important public entity to ensure our economic efficiency can be maintained with efficient and reliable mass public transport system. It should not become an entity for PAP government to "reward" their own people or for purely self serving profiteering agenda. Neither should it be a dumping ground for retired general with absolutely zero experiences in running such important public train transport system.

SMRT is not just any other company which you could just manage with your mouth or shifting resources here and there. It needs people who really understand the whole technical aspects of the train system and its operations to manage it effectively. No matter how smart you are or what a scholar you are or how good you are in maximizing profits, you will need to get the fundamentals right Reliability of the whole train system will affect the whole country's economic efficiency. This should not be taken too lightly

Up till now, from Saw to Quek,the results speak louder than anything else: they have BOTH FAILED in running SMRT effectively, FAILED to maintain its technical reliability despite of the fact that they were increasing their own salaries over their tenure.

No matter how much tax payers money PAP is willing to throw into this system, as long as they do not have the right person who knows the whole train system inside out, they are not going to get any reliable results out of such massive injection of funds.

Desmond Quek should be replaced immediately by someone who really have the wealth of professional experiences in running such a subway system so that the right talent and focus could be used to solve the current problems. Else, Singaporeans will have to continue to expect regular train break downs and disruptions as part and parcel of their lives.

Don't forget, as you mentioned about the mentality of maximising profit, SMRT nearly wanted to venture into TELCO business to compete with SINGTEL AND STARHUB. It is scary to see how they tried to diverse, divert and lost every focus at the expenses of users, so that the shareholder and top managements get to earn substantially obscene salaries, bonuses and dividends. SMRT failures, are regular reminders to users of our rotten systems and management.

While you raise some valid points, your blanket that the PAP and SMRT is out to rip people off and reward themselves simply discredit yourself. If you want to establish a real alternative, you have to be objective and not emotional. Please try again.

I will sure vote the current ceo and transport minister out and demand for new elections to replace them...this is worse than mdm park's case in South Korea.

Shouldn't LTA be held partly responsible for this epic mess that our MRT is currently going through as well?